Betty Belts team rider Hailey Partridge shares with us her story and photos from her summer trip to Spain and Holland, where she and her twin sister Sierra and other O’Neill team riders taught surfing to hundreds of eager Eurogroms. 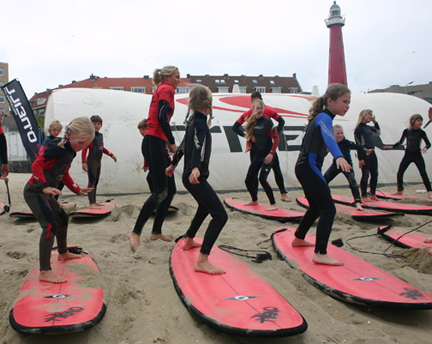 Sierra and I were given the opportunity to go on the trip of a lifetime this summer; both of us along with Joey Hutson, Chris Lynch and Travis Nicolet from Santa Cruz would fly to Holland and Spain to be surf instructors for the Oneill Surf Academy. The Surf Academy was started back in the 90â€™s by Richard Schmidt, Jay Moriarity and Robert â€œWingnutâ€ Weaver in conjunction with Oneill Europe. The â€œSurf Academyâ€ is a surf school that travels through a few countries in Europe every summer and teaches kids ages 6-16 how to surf. Since the program was started, very few girls were chosen to be instructors so it was a huge honor for Sierra and I to be a part of it. 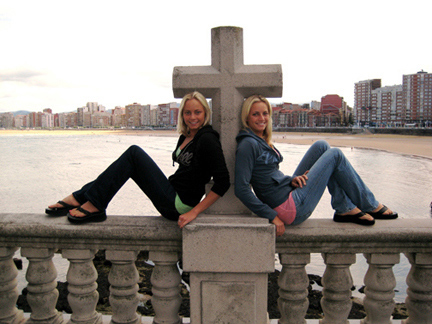 After those three spectacular weeks in Europe I wasnâ€™t ready to leave at all. The trip had far exceeded my expectations and was way more than a trip of a lifetime. We met so many amazing people, got to surf some epic waves and most importantly we taught over 600 children how to surf for the very first time. 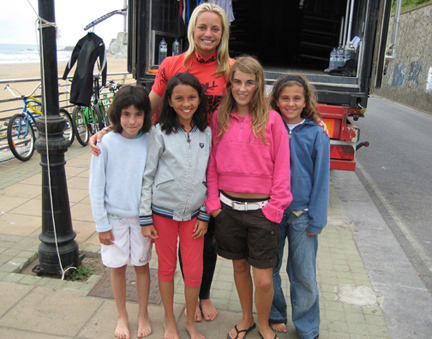 The gratification I felt after each day of teaching those kids was almost indescribable. Just seeing the smiles on their faces after they stood up on their very first wave was amazing. I was able to see firsthand how incredible it is to pass on the gift of surfing.
â€œThe journey has ended but the dream will never die.â€ -Chris Lynch (on the last day of the Surf Academy)

This website uses cookies to improve your experience while you navigate through the website. Out of these, the cookies that are categorized as necessary are stored on your browser as they are essential for the working of basic functionalities of the website. We also use third-party cookies that help us analyze and understand how you use this website. These cookies will be stored in your browser only with your consent. You also have the option to opt-out of these cookies. But opting out of some of these cookies may affect your browsing experience.
Necessary Always Enabled
Necessary cookies are absolutely essential for the website to function properly. This category only includes cookies that ensures basic functionalities and security features of the website. These cookies do not store any personal information.
Non-necessary
Any cookies that may not be particularly necessary for the website to function and is used specifically to collect user personal data via analytics, ads, other embedded contents are termed as non-necessary cookies. It is mandatory to procure user consent prior to running these cookies on your website.
SAVE & ACCEPT
Skip to content
Go to Top