Sarah Palin Not Smarter Than a Third Grader

How important is education as a political agenda?

Here’s a letter Sarah Palin sent out to a friend of mine who is a registered republican (he plans to vote for Obama) asking for financial campaign donations.

Instead of the full date, which would be the traditional way, she has “Wendnesday Morning” on it. That’s right, WENdnesday (sic)!

I think most of us learned how to spell the days of the week when we were in second or third grade and never forgot after that. (sigh….)

I can’t believe that not only did her proofreader not catch this, but that she signed her name to it without noticing the error. Attention to detail on anything she will be signing is the least we can expect from any politician, let alone a potential vice president.
Yikes!

If you think this could be a fake, ask some of your republican friends (if you have any). I’m sure tens of thousands if not hundreds of thousands of copies of this letter went out.
I don’t know about you, but I’d expect a higher level of competence from a candidate. 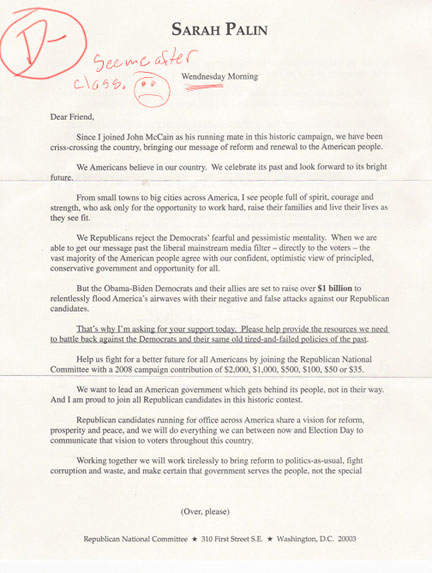 This website uses cookies to improve your experience while you navigate through the website. Out of these, the cookies that are categorized as necessary are stored on your browser as they are essential for the working of basic functionalities of the website. We also use third-party cookies that help us analyze and understand how you use this website. These cookies will be stored in your browser only with your consent. You also have the option to opt-out of these cookies. But opting out of some of these cookies may affect your browsing experience.
Necessary Always Enabled
Necessary cookies are absolutely essential for the website to function properly. This category only includes cookies that ensures basic functionalities and security features of the website. These cookies do not store any personal information.
Non-necessary
Any cookies that may not be particularly necessary for the website to function and is used specifically to collect user personal data via analytics, ads, other embedded contents are termed as non-necessary cookies. It is mandatory to procure user consent prior to running these cookies on your website.
SAVE & ACCEPT
Skip to content
Go to Top